Art Institute Of Chicago Buildings Getting A Makeover

One of the citys most important buildings is in for a change. Spanish architecture powerhouse Barozzi/Veiga plans to transform the Art Institute of Chicagos multi-building campus which sprawls across the Metra tracks in Grant Park.

The company is named for its founders, Fabrizio Barozzi and Alberto Veiga. We wanted to assess their museum chops, but unfortunately, theres not a lot to work with. The companys web site lists more than a dozen museum designs, but most of them seem to be competition entries, not actual finished buildings. So we refer you to F/Bs most celebrated work, the Szczecin Philharmonic Hall in Poland. Follow this link to get an idea of what that looks like.

What the companys designs all seem to have in common are very strong geometric forms. Most are sparsely fenestrated blocks or slabs, though a few take on triangle shapes. The style is somewhat reminiscent of the Expo 67 buildings in Montréal. If you havent up that way, think about the 1979 Buck Rogers TV show, which was partially filmed there.

That may sound terrible, but consider that most of the Art Institutes buildings already look like boring beige and grey slabs. At least the slabs that come out of Barozzi/Veiga are not boring, so what it comes up with should be an improvement.

The company summarizes its plans thusly:

An Urban Catalyst For Creativity

Recognized as the most influential art college in the United States by Columbia Universitys National Arts Journalism survey, the School of the Art Institute of Chicago currently occupies 11 buildings in its downtown Chicago campus. SAIC commissioned us to develop a strategic master plan which would decrease its dependency on leased space, reflect the inter-disciplinary foundation of the schools pedagogy, and provide greater connectivity to the surrounding urban community. The plan was guided by the schools vision:

Our campus can be a beacon for artistic development and exchange, a rich and complex catalyst at the forefront of creative inquiry.

The one million square foot plan strategically re-aligns SAICs existing assets, re-purposing four current facilities to serve tomorrows needs. In addition, a new iconic facility is proposed to replace current leased space in multiple buildings which can right-size the campus through significantly greater efficiency and utilization, providing the right kind of space in the right place. Over 500 members of the SAIC community participated in the strategic planning process.

The campus proposed by this plan will not just benefit the school community, it will positively impact the lives of everyone in Chicago and across the globe who experience our transformative creativity and scholarship.

The following 18 files are in this category, out of 18 total.

/5 The Concourse Is A New Gathering Place

Few contemporary architects have such a strong commitment to purpose and place as Renzo Piano. Each of the eight US museums he has built or extended, from The Menil Collection in Houston to the California Academy of Sciences in San Francisco is shaped by context and programme. The newly completed Modern Wing of the Art Institute of Chicago is no exception. It comprises two blocks of galleries extending north from earlier additions to the Beaux Arts original, linked by a skylit concourse and shaded by aluminium blades set into a lofty white steel canopy. Limestone from the same quarry as the 1893 block clads the side walls, and a double glass curtain wall to the north dissolves the mass.

It was a privilege to build in Chicago, says Piano. Its a place of myth for me. As a young architect I saw it as the city that reinvented itself after the great fire, using steel balloon frames to create buildings that were light and vibrant. It invented modernity, and my buildings try to connect with that legacy.

The transparency of the north facade turns the axial concourse named Griffin Court into a public gathering place, alive with school parties using the educational centre to the east and visitors to the shop and temporary galleries on the west side. The shallow pitched skylight is cable-braced like the rigging of a ship. 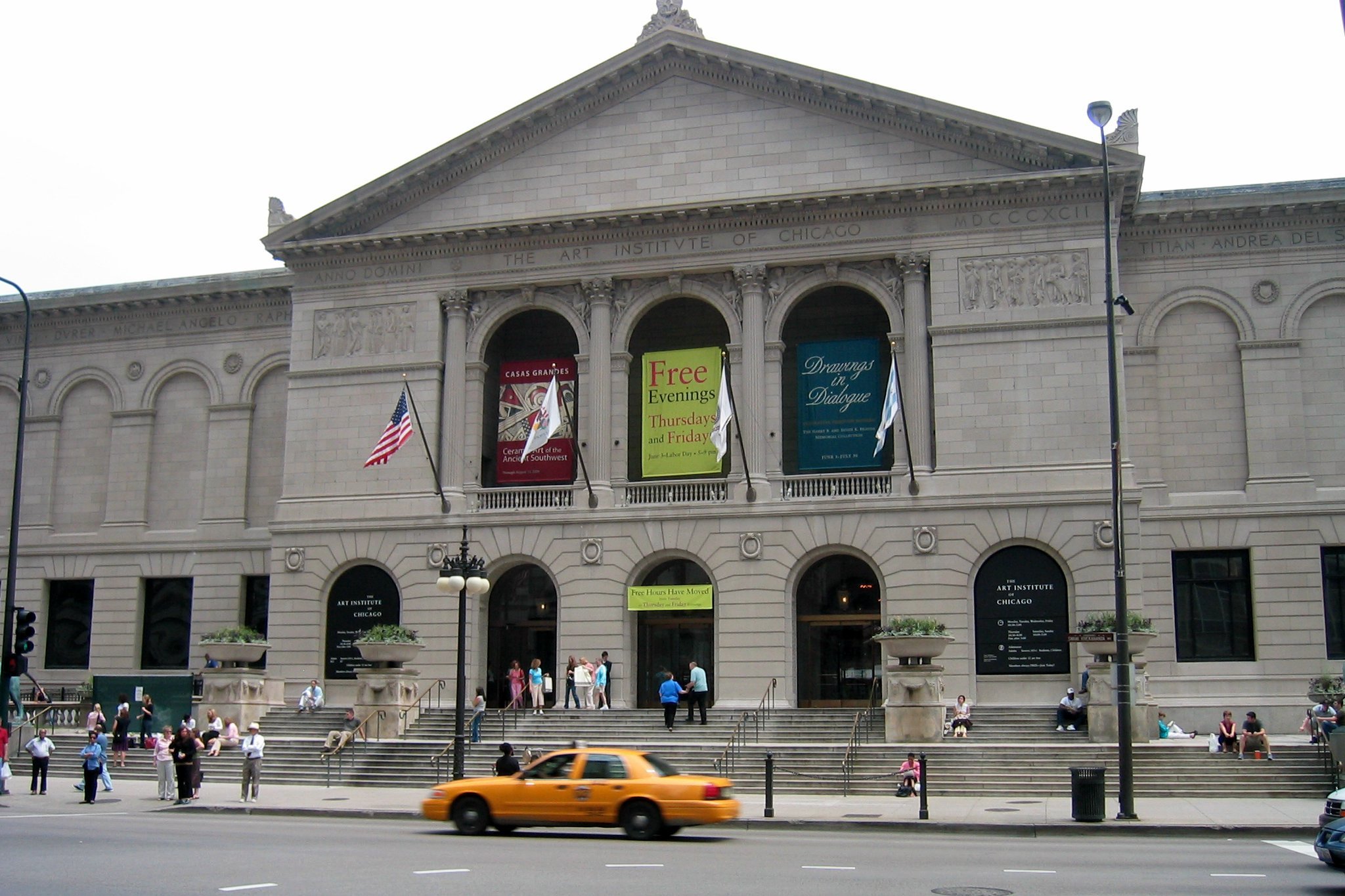 There have been numerous building additions over the years. The most recent addition is the Modern Wing funded in part by Pat Ryan. This new building increases gallery space by 33% and accommodates new educational facilities. It opened to the public on May 16, 2009.

In the mid-1980s, VHA was commissioned to re-establish the Art Institute’s original 1893 Beaux Arts circulation plan, which has as its focus the building’s grand stair and adjacent Michigan Avenue Lobby. The lobby’s coffered ceiling was restored and custom light fixtures, based on original designs, were introduced. A marble reception desk was created to consolidate museum admission and information functions. The Grand Stair and skylight were restored and VHA installed fragments from Chicago’s lost architectural treasures in the space.

The original balustrade was restored, mahogany handrails were refinished, the existing skylight was re-glazed, and lighting was improved. Selections from the museum’s collection of architectural fragments were installed on the walls of the upper stair hall, along with other sculptural objects.

The Art Institute of Chicago moved to its Beaux-Arts building on Michigan Avenue after the World’s Columbian Exposition in 1893. The building entrance is flanked by two bronze lions that were given as a gift from Mrs. Henry Field for the museum’s opening. The museum has added buildings to house its growing encyclopedic collections over the years, most recently unveiling its 264,000-square-foot Modern Wing designed by Renzo Piano.

The museum-school partnership remains the largest in the United States and is integral to the education SAIC provides its students. Generations of SAIC alumni remember walking through the museum to get to their classrooms, which were once housed in the basement of the building. Today students continue to have open access to the museum, its research library, and its collections, which span 5,000 years of human history and represent cultures across the globe.

The new Modern Wing by architects Renzo Piano Building Workshop has opened at the Art Institute of Chicago.

A canopy made of aluminium blades is supported over the two pavilions and filters northern light into the third floor galleries but deflect harsh light from the south.

The third floor of the west pavilion is linked to Millennium Park via a foot bridge.

Here’s some more information from The Art Institute of Chicago:

Above image is by Dave Jordano

Significantly, the Modern Wing also greatly expands the areas of the museum open to the public without an admission fee. The Ryan Education Center is a complete renovation of the museums education and interpretive facilities, featuring state-of-the-art technology, classrooms, studios, resource centers, and a library. This entire area is open free to the public. On the third floor, visitors can enjoy free of charge the Nichols Bridgeway, the Bluhm Family Terrace, which features exhibitions of contemporary sculpture, and access to the restaurant, Terzo Piano.

Above and top images are by James Iska, the Art Institute of Chicago

SAIC leases several classroom spaces from the Spertus Institute for Jewish Learning and Leadership. Designed by Krueck and Sexton Architects with a façade of angular windows facing South Michigan Avenue, the structure and aesthetic of the building are unique in its stark contrast to the surrounding architecture of historic Michigan Ave.

The event will be hosted from 12-4 PM at SAIC’s 280 Building. You may begin to line up outdoors starting at 11am . The venue is accessible by public transportation, and more info on traveling to our campus can be found by visiting:

SAIC invites you to one of the nations largest portfolio days with representatives from nearly 50 nationally accredited art schools and universities on hand to discuss your work and assist you in pursuing an education in the visual arts. High school students, parents, teachers, guidance counselors, and college transfer students are encouraged to attend this four-hour educational event, created for emerging visual artists and designers. Representatives from colleges of art and design will review artwork, discuss programs, and answer questions about creative and professional careers.

This is an educational eventno admissions decisions or scholarship awards will be offered. Portfolios should include your best and most recent work, but can also includeworks in progress, sketchbooks, and tear sheetsit is not necessary to mat or frame work. Bring original artwork whenever possible, and keep your presentation simple the work itself is what is important.

Galleries Above The Railroad Tracks

The Art Institute building is unusual because it is two sets of buildings linked by a two-story bridge over open-air railroad tracks. The construction of Millenium Park moved the MetraElectric and South Shore railroad lines underground. This made room for the new Modern Wing and exterior courtyards. Before this change, the lower level of the bridge building was formerly the windowless Gunsaulus hall, but is now home to the Alsdorf Galleries showcasing Indian, Southeast Asian and Himalayan Art. The renovation added windows facing north toward Millennium Park. Renzo Piano designed the gallery space in conjunction with his design of the Modern Wing. The gallery features the same window screening used there to protect the art from direct sunlight. The upper level of the bridge building formerly held the modern European galleries, But it was renovated in 2008. The galleries now show Impressionist and Post-Impressionist art. 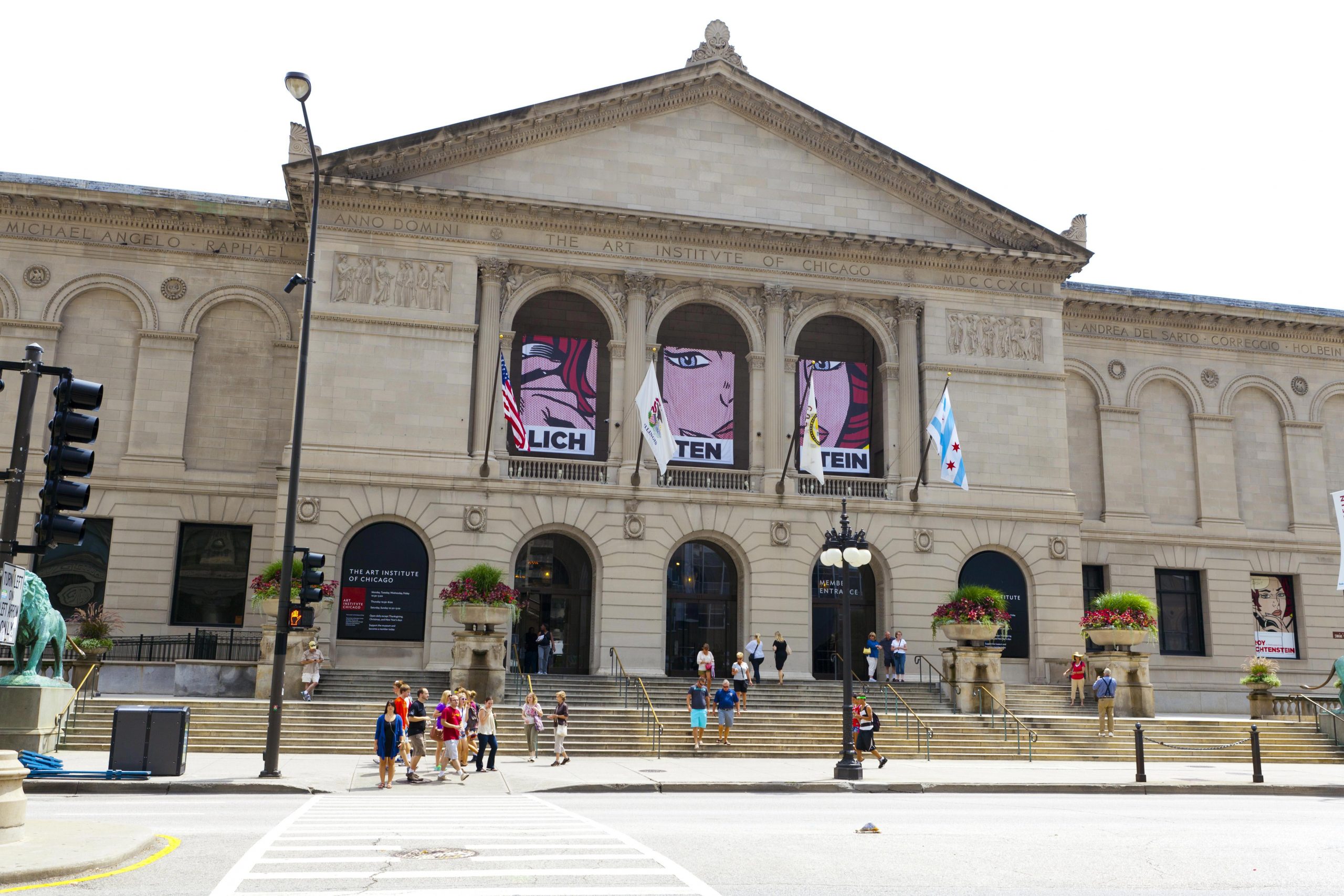 The Art Institute of Chicago has hired a Barcelona architectural firm to craft a master plan that could bring profound transformation to the Michigan Avenue museum in coming years.

For its first North American commission, the prize-winning firm Barozzi/Veiga has been quietly studying the institutions sprawling campus for the past two years and has begun formulating ideas aimed at making an inward-looking museum rooted in the 20th century more extroverted and modern via methods that could include adding new buildings, reconfiguring existing ones and rethinking the presentation of art within them.

At some point we need to be understood as more of a porous social platform than an impervious temple to culture, said museum Director James Rondeau.

On Tuesday, Rondeau pulled back the curtain to introduce to the full Art Institute board the architects he hopes will help lead the museum in that transition, firm principals Fabrizio Barozzi and Alberto Veiga. Their hiring was also announced to museum staff, whose buy-in will be similarly important if major changes are ultimately made.

Rondeau said he saw as a cautionary tale the 2017 postponement of an announced major contemporary and modern wing revamp at New Yorks Metropolitan Museum of Art in the apparent absence of funds to complete the project.