Amtrak From Milwaukee To Chicago

Know More About This Tour

This tour is guided by a Historian. It is not theatrical, but rather the tales are told in a more around the campfire fashion. Spooky and verified ghost stories will be shared throughout the tour along with visiting the famous gangster hang outs.

This is a 2 2.5 hour walking tour through The loop area of the citys downtown district. The tour is about 1.5 miles long with frequents stops and a refreshment/restroom break.

The tour meets at 8 p.m. nightly next to the Wyndham Grand Riverfront Hotel at 73 E. Upper Wacker Drive on the corner of Wacker Drive and N. Wabash.

As gambling and other illegal activities such as prostitution took over the city of Chicago, it soon became a gangster haven, and much of the history of this dark side of the city can still be experienced today from the tales, the sites, the people, and all things associated with this gangster era of the city.

Chicagos gangster history can be traced to 1920, when the illegalization of alcohol consumption, manufacture, and the sale was signed into law in the United States. Before that time, different gangster groups were already in control of different parts of the city. With the illegalization of one of the citys most beloved beverages, gangs saw an opportunity to make money by smuggling the products. Names such as Al Capone Chicago outfit, the North Side Gang, and the Genna brothers became popular during this period as they were key players in this business and the subsequent crimes and murders that took place over the following years.

Soon the city began experiencing gangster-related wars and terrible deaths. Hundreds of gangsters were murdered, shops that refused to purchase alcohol from groups were being bombed, and massacres were ordered.

Visitors to the city today can still see some sites where gangster-related crimes, wars, and deaths occurred. Gangsters and Ghost Tour in Chicago is the perfect tour to take for this experience as it takes visitors to the most popular sites from Chicagos gangster history.

The numerous deaths that occurred in Chicago have made the city one of ghosts and haunted sites. Most sites that now seem normal were locations for some horrific murders committed by serial killers and gangsters.

The Murder Castle is one of the popular haunted sites associated with mass murder in Chicago. The story surrounding this castle can be traced to Americas first serial killer, a man who took the name – H.H Holmes, actively operated in Chicago and oversaw the murder of 27 people, including two of his daughters, according to his confessions. This number remains one of discussion to this day as some sources claim he oversaw the murder of up to 200 individuals while others claim he only murdered nine people.

His most popular mission is said to have been carried out during the Chicago World Fair when he lured people into a place he touted as a hotel with comfortable rooms. With visitors coming to Chicago from all over the country for the event, H.H. Holmes succeeded in taking some to the said hotel. Those visitors never came out, and the details that follow are gruesome. While the original building was destroyed in 1938, one can still visit the site today, which now hosts the Englewood Post Office.

DEVIL AND THE WHITE CITY BUS TOURS CHICAGO’S FIRST H.H. HOLMES TOUR!Created by Weird Chicago in 2006 , this is the original tour that delves into the history, mystery, murder and mayhem of the American serial killer, H.H. Holmes and the Worlds Columbian Exposition in Chicago in 1893. During the Worlds Fair, Holmes operated the infamous Murder Castle and this was the first tour to take you on a journey back in time to not only the places where Holmes sought out and dispatched his victims, but also to take a look at the remnants of the spectacular fair and to get an inside look at Chicago in 1893 and what the world saw when it came to the Windy City! Experience it with the company that started it all!$42 for Adults | $32 for Kids

Our acclaimed tour of ghosts, gangsters, mystery, the macabre, and everything else that makes our tour so great and has earned us so many fantastic reviews! Join us and experience Chicagos many ghosts, haunted history, and all around strangeness! We dont just drive past Chicagos spooky places, we let you experience them first-hand! Often imitated, but never equaled, its a tour of the Windy City that you wont soon forget!

* 3 Hours of Weird Chicago History & Hauntings at the Citys Spookiest Locations!* On and Off the Bus throughout the evening* Based on More 25 Years of Research and Writing 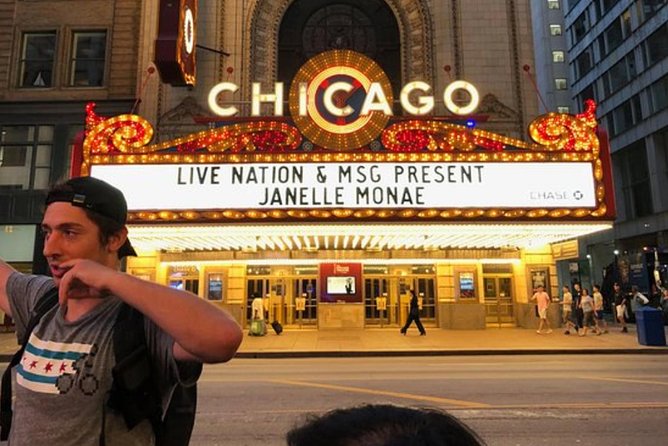 The history of the city of Chicago stretches back to the 17th century when different groups of people, from missionaries to French explorers, made their way to the shores of what is now known as the United States, although the beginning of the modern city known to the world today began in the 1830s when the area was incorporated as a town in 1833 and then a city in 1837. Its incorporation into a city was due to the major role it played in the transportation network and food production in the country. With business continuing in the area, development came to the area swiftly, as did the arrival of African American immigrants, Mexicans, Puerto Ricans, and many other groups of people from different parts of the world.

THETRAVEL VIDEO OF THE DAY

It would not be long before this growing city experienced one of its saddest moments in history. This was 1871 when a fire disaster destroyed up to 18,000 people and led to the death of 300 people.

Soon the city became a place of music, vibrant saloons, and politics, as well as violent racial conflicts, gambling, and extreme pollution. Much of this history filled with good and bad characteristics is what makes up the city of Chicago known to the world today, and those visiting can take a peek at this city by engaging on tour.

Types Of Gangsters And Ghost Tours

Offering a non-theatrical crime tour that encompasses approximately 1 ½ miles, Gangsters and Ghosts Tours are focused on the thing that they know bestChicagos dark and ominous history. Tours are hosted by knowledgeable historians who share stories to paint a picture of the sinister world of the windy citys past. Spooky tales of gangsters and ghosts along the streets and in the buildings of Chicago are told as the tour group stops at famous locations in the Chicago Loop Vice District.

Gangsters And Ghosts Tour In Chicago

Get a close look at the #1 Gangster and Ghost Tours in Chicago!

For those who are interested in exploring Chicago from a different perspective a mix of ghosts and gangsters, this is a unique experience worth trying out during your stay in Chicago. Learn about the history of this distinguished American city on the places that started it all.

Enjoy the cream of the crop of both worlds with the 2 in 1, a history-based tour with a guide where you will learn about Chicagos gangsters and ghost stories, starting from the well-known Chicago Loop Vice District.

Where To Begin To Explore Chicago’s Seedy Side

Stories 2 Tell: What Happened To The Chicago Mob?

There are many ways to explore the history of the city of Chicago. One can visit one of the numerous museums in the city and read about the history, but this exploration method is limited as it does not take one to visit the sites where some historic occurrences took place. This is why it’s important to join a tour, as it ensures guests are told the history of the city verbally while being taken to the historic sites around the city. When exploring Chicago’s history, one interesting place to start is the gangster era of the city, as it was one of the most interesting.

As we mentioned in previous sections, some tours focus on both the dark and twisted stories from Chicagos criminal history and reported hauntings that have taken place in the city.

If youre interested in learning about both subjects while youre exploring Chicago, these tours provide an excellent opportunity to discover a side of the windy city that some visitors never get to see.

One popular option is a 2-hour walking tour which includes stops at several notable locations in the Chicago Loop such as the Congress Hotel, the Palmer House, and Death Alley.

Answers to questions you might have before taking aGangsters and Ghosts Tour:

What Youll See On A Gangsters And Ghost Tour

Exploring the Chicago Loop Vice District, Gangsters and Ghosts tour groups typically meet at the Wyndham Grand Riverfront Hotel and spend time walking throughout the local area. The district got its name during the 20s and 30s when the area was riddled with speakeasy saloons, secret underground tunnels and shady deal-making.

Guests of the tour will visit various crimes scenes andhaunted locations where all kinds of infamous activities happened a centuryago, including:

Chicago Gangsters And Ghosts Tour Tickets Prices What To Expect

This Gangsters and Ghosts Tour in Chicago is a two-in-one tour where you learn the citys history and also about its underbelly.

It is a history-based guided tour of Chicagos gangsters and ghost stories, right in the famous Chicago Loop Vice District.

A historian takes you around the citys important landmarks and helps you travel back in time to the Roaring Twenties when the Chicago Loop was a hotbed for bootleggers, speakeasies, and gangsters like Al Capone.

As part of the Ghosts and Gangsters tour of Chicago, you will also visit the Palmer House, Congress Hotel, and Death Alley, which were all once gangster hangouts.

Book A Gangsters And Ghost Tour

Tickets for Gangsters and Ghost Tours should be purchased in advance online. Tours often sell out. Booking with is easy online. Online bookings show weekly availability including tour times as well as revealing tours that are already sold out. Pay for your tour in advance with a credit card and receive an email with all of the information you need about where and when tours meet as well as what to expect.

If you are looking for fun things to do in Chicago at night, why not try one of our Chicago haunted ghost tours? Join Absolutely Chicago Segway Tours on this haunted segway tour of Chicago where we share Chicago’s history of death, disasters, murder, infamous gangsters, and ghostly tales. You will glide around the streets of downtown Chicago, escorted by one of our Segway tour guides. Eerily, we creep through the shadows and darkness to hear some of Chicago’s true ghost stories and view the site where some of Chicago’s most appalling disasters took place.

We begin this Haunted Segway Tour of Chicago at our location and glide our segways through the dark paths of the park. We make a stop at Buckingham Fountain, situated between Lake Michigan and Michigan Avenue, to view it in all its lighted glory. Here your guide will share stories of Al Capone’s haunted yacht, and the famous Chicago gangster’s affiliation with a notorious Michigan Avenue hotelallegedly the most haunted hotel in the city. You will learn about the creepy things that have happened in the hotel, such as a number of unexplainable deaths and the self playing piano in the grand ballroom.

This haunted tour of Chicago is a fun thing to do in Chicago in a creepy sort of way!

Cheap Flights From Chicago To Atlanta

Flights From Chicago To Portland

Whats The Tallest Building In Chicago